Buttery pears are roasted in the oven with a vanilla scented caramel syrup and served with a bourbon spiked coconut cream and glazed pecans.

Roasting pears is one of the simplest but oh so special ways to dress up pears for dessert.  Elegant but effortless is how I would describe these vanilla roasted pears.

While a good, juicy pear is best eaten raw out of hand, there are times when a little help in the form of a fragrant vanilla bean, a drizzle of honey, a pat of butter and a hot oven can be just the thing; namely when you’ve got company coming and not enough hours in the day.

When it comes to simple seasonal desserts, few things are as comforting on a fall or winter day as baked or roasted fruit.  In particular the delicate flavors of raw pears intensify in the heat of the oven becoming even more meltingly tender and silky.  Roasting amplifies the best of the fruit while the vanilla scented syrup adds a complex caramel-like sweetness that pairs so nicely with the buttery pears.

While the butter provides a richness and lusciousness to the sauce and the wildflower honey a floral note, maple syrup and coconut oil work quite nicely here as well for a vegan or dairy-free version. 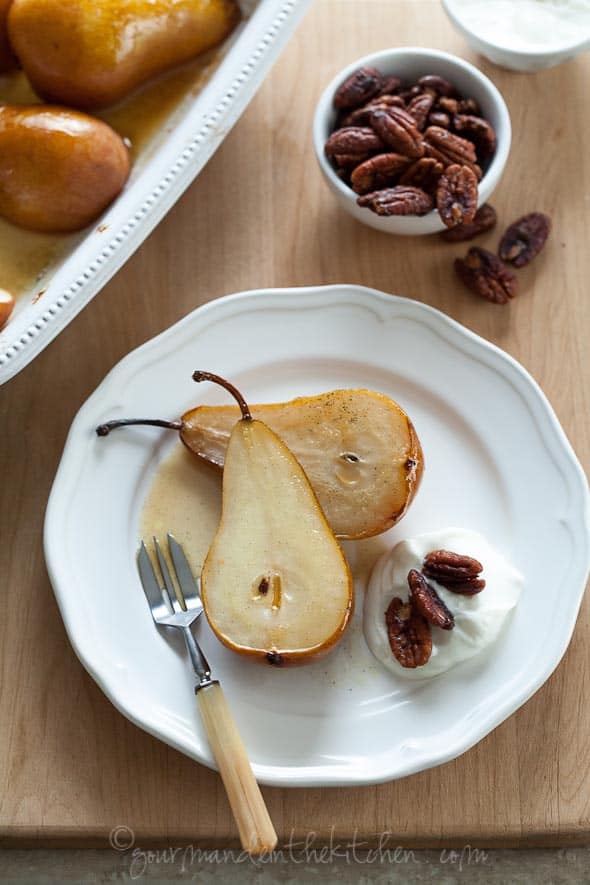 If you want to get even fancier I suggest you take a few extra minutes to make the coconut bourbon whipped cream and buttered pecans as they make a fine accompaniment.  And although I’ve talked these up here as a party dessert, frankly they are just as likely to be devoured straight from the pan any old day of the week.

Buttery pears are roasted in the oven with a vanilla scented caramel and served with a bourbon spiked coconut whipped cream and buttered pecans.

For the Glazed Pecans:

For the Roasted Pears:

For the Coconut Whipped Cream:

Disclosure: This post contains affiliate links. Find out what that means for you here.